Warning: session_start() [function.session-start]: Cannot send session cache limiter - headers already sent (output started at D:\Inetpub\vhosts\stovers2peru.com\httpdocs\wp-includes\feed.php:2) in D:\Inetpub\vhosts\stovers2peru.com\httpdocs\wp-content\themes\theme-salutation\parallelus-salutation\framework\utilities\email-functions.php on line 3
 Testimonies
Please, select the aspect of our belief to read more about it. If you want you may view and save a copy of our Doctrinal Statement in PDF format. 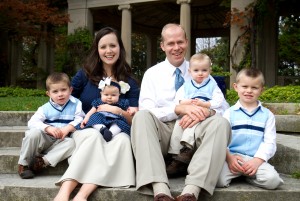 I was saved on March 17, 1984, in my home in Cambridge, Ohio. It was a Tuesday evening and I was at home with my mother. I began to ask her questions about knowing the Lord as Savior. It was on that evening that I knelt and asked the Lord to forgive me of my sin and to save me. I thank the Lord for His saving grace and for the opportunity to serve Him. My salvation is the most important decision that I have ever made in my entire life.   During my first semester at Crown College, the Lord called me to preach and to go to the mission field. In 2001, I had the opportunity to take a 6-month trip to Perú. During this trip, the Lord worked in my heart in a mighty way and gave me a great burden for souls in Perú and around the world.  I began full-time deputation in 2005 as a single missionary. The Lord allowed me to meet my wife that same year, and we were married in June of 2006. We completed deputation (together–much better!), and began serving the Lord in Arequipa, Perú, in July of 2008. God allowed us to serve 3 years in Arequipa. In July of 2011, we came back to US for a medical leave due to an extreme case of Hepatitis A that I got while in Arequipa. We spent the year of 2012 reporting to our supporting churches, and returned to Peru in January of 2013. We now serve in the southern city of Tacna.

I accepted the Lord Jesus as my personal Savior when I was twelve years old after a chapel message at my Christian school. The Lord convicted my heart that I was a sinner and that I needed Christ to save me. I am so thankful to the Lord for my salvation and for His constant presence in my life.  God has given me a burden for Spanish-speaking people. In 2000, I surrendered my life to go to the mission field. God led me to Crown College in 2003, and it was there that I met Robert. We were married on June 23, 2006. In July of 2006, we took a survey trip to the city of Arequipa, Perú. During the trip God truly opened my eyes and broke my heart for the people of Perú.